In Bromley Court and surrounding areas.

Many learner drivers fail on the bay park manoeuvre, mainly because they are nervous in the first few minutes of the test. If you do feel nervous, take a few deep breaths before starting. The driving examiner will be marking you on two things during the bay park manoeuvre. The first is accuracy and the second observations. As long as you manage to get between the two lines, you would pass the accuracy section. The exercise does not have to be completed in one go. Observations during this exercise are very important. Keep a lookout for the entrance and exit of the car park and the driving instructors who may be wandering around.

Once you exit the car park, you will enter into quiet residential roads which will become busier as you head towards the town center. Busy roads such as South circular and the A20 are likely to feature in the drive from Bromley test centre. The examiner will test your ability to deal with a variety of junctions, roundabouts and crossroads. There is one in three possibilities of being asked to carry out the emergency stop procedure. If you are asked to carry out the emergency stop procedure, the examiner will warn you beforehand.

There is a car park at Bromley driving test centre. However, please park only in bays marked for DVSA use and report to the dedicated waiting room. An examiner will meet you at your appointed time 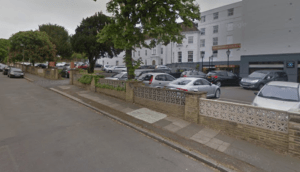 Nearby driving test centres to Bromley.

This driving test centre is new and temporary, therefore pass rates are not currently available. We will update this section when they become available to the public.

We offer intensive driving courses in Bromley, helping you to pass within 1 to 2 weeks. Our courses are flexible and tailored to suit your needs. It is the fastest, most affordable way to take the DMV Test. We have got a bundle that covers both theory and practical tests.

So, if you are looking for Intensive Driving Courses in Bromley, choose from the intensive driving courses that we offer, or give us a call to discuss what courses are right for you. We also provide a Semi-Intensive Course in the Bromley area. Looking for Driving Lessons In Bromley?.

Bromley is a big city in south east London. Bromley is easily accessible by taking the A21.

Bromley has had a series of driving test centres in recent times. This centre has since closed, with testing now being carried out at its current Burnt Ash Lane venue.

We provide both Manual driving lessons and Automatic Driving lessons in Bromley. This includes surrounding areas as well, like; West Wickham, Beckenham, Orpington, and Sidcup. We have a number of high-quality, locally-based driving instructors in Bromley, who are all DBS (formally CRB) checked, and are, of course, approved by the DVSA. DTC UK driving school also offers some of the best intensive driving courses in Bromley, along with some of the best bang for your buck packages.

We do not do stupid intro offers which last for just 10 lessons – you are paying for quality every single time. There are a range of extras that we also offer that will help to sustain your learning experience and keep you on the road.

Our research suggests that it takes us 10 hours less to complete the course compared with the closest competitors. Two roads spring to mind when thinking of learning how to drive in Bromley. Namely, the A21 and A2212.

These roads are notoriously busy at peak times, and it takes quite some practice to get used to them. Bromley also has a significant number of residential areas which may take you around on your tests.

Make sure to prepare well, gaining some local knowledge about the area. Prepare by understanding the hazards that you might encounter while dealing with driving through built-up areas. Are you looking forward to getting a drivers license?. Practiced on all local roads?.

Your Instructor is the best person to ask if you would like to have a recent route to test on at the Bromley Test Centre. The DVSA does not publish routes anymore, so in this respect, resources are extremely limited. We are sure that you would agree, it has very little bearing on whether or not you will pass your test, as long as you are capable of driving.

Eight miles south of Bromley lies a town called Brasted. Robert Adam designed two houses in Kent and Brasted Place is one of them. It was built in 1784 for John Turnton who was a physician to George III.

Chelsham is eight miles west of Bromley and is close to the boundary with Greater London. It is high up on the slopes of North East Surrey. Buried in the churchyard is a guy named Thomas Kelly who looked after his father’s sheep on Scotshall Farm when he was younger and he went to London at the age of 14 in 1986 and became a publisher.

Chevening is a tiny hamlet which is situated 7 miles south of Bromley. There is not much there to identify Chevening apart from a church. There was a church at Chevening in 1122 of where the first known priest took office in 1262. The present church is 13th century – a tower was later added to it in about 1500.

Eynsford is known for its architectural styles which includes several timbered houses. A River Darent swarms over the ford – this is where the local children sit and play with running water. For people who are older, there is a hump-back medieval bridge with two low semi-circular arches separated by a bold cut-water on the upstream side where the river passes under as well as round the white weatherboarded Old Mill, with its barrelled roof of corrugated iron.

Farleigh is in the north-east corner of the country. It is very drawn to fashion thanks to the qualities of local residents. Farliegh was supposed to be included in the London Borough of Croydon – but due to the local government boundaries being changed in the 1970s it was not. Farleigh lies 8 miles southwest of Bromley.

Ide Hill is known for its wealth and picturesque villages and Ide Hull – which is about ten miles south of Bromley is one of them. Ide Hill stands on one of the highest points of the Kentish sandstone ridge, it offers views south over the Weald and north across the Holmesdale Valley to the North Downs.

Ightham is ten miles southwest of Bromley. It was at Ightham church, in 1570, that William Lambarde, author of the first English county history, A Perambulation of Kent, married his first wife, Jane.

Kemsing is 8 miles from Bromley and is amongst the West Kent countryside that looks like one great park. It is centred around St Edith’s Well which neighbours a little walled garden behind the village war memorial.

Here is where Surrey disappears and the A25 runs on into Kent. It’s very common and neighbours Limpsfield Chart which is below the Downs about 10 miles southwest of Bromley. The main street through Limpsfield runs at right angles to the A25 and is full of half-timbered houses and little nooks and crannies.

Otford is 7 miles south of Bromley and is known for one of its attractions which is the Bull at Otford – it is a high-backed oak settlement that once (it is said that it belonged to Thomas Becket himself). It is a thriving village, with a school, shops, a car park and the only ‘listed’ duck pond in the country, where the ducks actually get a food allowance from the parish council.

However, please remember that our semi-intensive driving course is designed for learners who have recently failed a practical driving test, international drivers, and those who are almost up to test standard. They are not suitable for the new beginner.

I failed my driving test and Bromley court and approached DTC UK. Was recommended to them by my driving instructor. They managed to get me a driving test just 10 days after failing. That was waiting time by law. It was worth every penny I spent.

DTC Quick Driving Tests booked a quick test and within a couple hours. I was offered a much earlier date than the one which was already booked.

Was very desperate since I failed. I wanted an Emergency test immediately. A friend introduced me to DTC Emergency Driving Tests. I can't believe how fast they work. Will definitely recommend to anyone.