In Hither Green and surrounding areas.

Being fairly close to central London, Hither Green driving test centre is located around many busy town roads. The driving examiner will require you to have a good knowledge of all sorts of road systems. This will include open and close junctions, crossroads and mini roundabout as well as large multilane roundabouts. 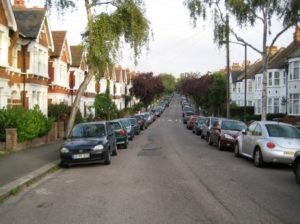 Many small residential roads will be part of the driving test. These roads seem relatively easy but can be hazardous due to them being narrow. The driving examiner will expect you to give way to oncoming vehicles whilst at the same time being aware of the space that you need to leave parked cars.

High-speed a roads such as the A20 and A205 are also likely to appear in the driving test. Many learners struggle with the high-speed roads. Driving examiners do expect you to make progress when conditions allow it.

There is a small step which leads to the Hither Green Driving test Centre. The test centre itself is on one level without stairs. Ample parking on site for vehicles. However, please do not park any more than 5 minutes before the driving test. Reverse into marked parking space. Both male and female toilets are available. Taxi, Cars and ADI testing are conducted at this test centre. 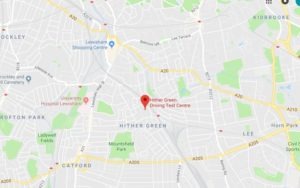 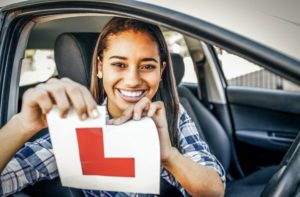 The reason for this low pass rate is that the driving test routes often pass into busy city areas, therefore if you are taking your driving test here, ensure that you are confident with driving in busy, congested city areas as the examiner will most likely take you to places like these.

Our unique, superb driver instructors are well-versed in all of the best roads to give you an effective learning experience. They also know great areas to practice in between lessons. Practice is the main aspect of training which builds confidence and speeds up learning. Driving in particular requires the right kind of practice in order for you to learn and fully develop as a driver. With Londons best driving instructors, Suja makes it easier to build up adequate practice with our guidance.

Our instructors are on hand to catch you in the wrong place and guide you back to the right path. We incorporate these gentle challenges so that you can thoroughly check your skills and build more confidence behind the wheel.

Driving an automated vehicle is considered to be the safer option for riding. An automatic car has brakes, an accelerator, and no clutch. The car changes gears automatically for you, so there is no need to focus on, or think about, the gears and the clutch when driving. Manual cars have the full system, with the brakes, throttle, and clutch.

You will need to shift the gears by yourself while driving. Most British drivers choose to learn how to drive by taking a hands-on course. This is because many commercial cars are manual, and people are sometimes assumed that someone who has a manual licence will be able to drive an automatic. At DTC Driving School London, we recognise that lessons on the manual are not for everyone.

Automatic lessons provide an opportunity to learn how to drive quicker, and some people are most comfortable with that option. Automatic cars are easier to handle in busy traffic, and they can be a practical choice.

However, lessons for the manual are cheaper, and you could potentially be driving two cars. DTC has the best driving instructors in Manchester, which offer lessons for both manual and automatic cars. Simply decide to learn one or the other, our instructors will take you on an effective London-area driving course.

Lewisham is one of the 35 major centres within Greater London, in the London Plan. It is located in south-east of London and is 5.9 miles south of Charing Cross.

Deptford has developed into a very well known area, very fast. It has a busy high street which is a market that sells produce, fish, and bric-a-brac. It is also known for its Indie shops and hip spots for tapas and Caribbean food  which fill the railway arches in Deptford Market Yard.

Eltham is within the Royal Borough of Greenwich and is 8.7 miles east-southeast of Charing Cross. It is one of the 35 major centres in Greater London.

Bromley was originally part of Kent and became a market town in 1158. It is within the London Borough of Bromley and is 9.3 miles south east of Charing Cross.

Up until 1857, Beckenham was known as a small village. The village got bigger after the coming of the railway in 1857. Most of its land was rural and was also private park land.

Crystal Palace is very well known for many different areas such as its namesake park which is known for its massive dinosaur models, a sports centre, and an urban farm.

Bexley is also sometimes known as Bexley Village or Old Bexley; this is to differentiate the area from the wider borough. As part of the suburban growth of London in the 20th century, Bexley increased in population, becoming a municipal borough in 1935 and has formed part of Greater London since 1965.

Welling is located in the London borough of Bexley and is 1.5 miles west of Bexleyheath and is 4 miles southeast of Woolwich.

DTC has the answer. We can provide you with an emergency driving instructor with a dual control car hire. With our “Driving Test Car Hire Hither Green” service, you have a choice between an automatic or a manual car.

However, if you don’t feel 100% ready, you have the option of taking our one-day intensive driving course. This short intensive course is designed for learners who have failed a practical test in the past or are almost at test standard. Find out more about our Intensive driving lessons Hither Green.

When you book your last-minute intensive driving lessons, you will have the choice of learning in an automatic or a manual car. Last year there were over 1.7 million driving tests conducted. Out of these, only about 30% were taken in an automatic car.

If you have no problem with the changing of gears, then it would be wise to take your last-minute intensive driving lesson and the official driving test in a manual car. Once you’ve passed in a manual car, you will in effect have 2 licenses. An automatic as well as a manual license.

I would recommend anybody reading this review to use the services of DTC driving test cancellations to change their driving test to an earlier date. With this service, you just cannot go wrong as you do not have to pay any money until you are happy with your new driving test booking.

The services of DTC UK is absolutely amazing. They are a highly motivated team searching for earlier driving test dates. It’s really worth trying them. They change my driving test date at Hither Green without any problems.

I finally passed my driving test at Hither Green.

After failing my first test, I called DTC Quick Driving Tests and burst into tears on the phone. The lady on the phone reassured me that I would pass and gave me confidence. Within a few days, the company was able to find a suitable date and time.

I can't praise DTC Quick Driving Tests enough. They do exactly what they say they will. I would highly recommend them.

Thanks to DTC Fast Track Driving Services, i have got my license much earlier than anticipated. it just amazing!!