Get your driving licence month's earlier

Located within the fire station at a retail park is Hemel Hempstead Driving Test Centre. As soon as you leave the retail park to expect a deal with a large variety of road systems. This will include large multilane roundabouts which lead to high-speed dual carriageways such as the A41. When joining a dual carriageway it is most important that you adjust your speed to match that of the traffic on the main road. Once on the main carriageway itself, you are expected to keep in the left-hand lane unless you’re overtaking.

Occasionally, the driving examiners from have a Hempstead will take the candidate onto rule country roads through various villages on the outskirts of Hemel Hempstead. Many learner drivers feel under pressure to drive fast on these country roads. However, just because road may be national speed limit it does not mean that it is safe to drive at that speed. You need to judge the road and traffic conditions. So if you’re on the country road with the national speed limit of 60 mph but you can only see six car lengths in front your maximum speed should be 30 mph. 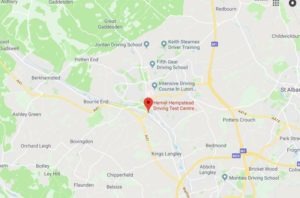 Hemel Hempstead has a pass rate which is in line with the average across the UK. Its pass rate is calculated to at 48.8%, similar to many other driving test centres. The pass rate varies from month to month, with pass rate being an average calculated over 6 months.

Brilliant and really helpful. DTC UK found me a quick driving test at Hama Hempstead even though I had many restricted dates.

As referred to the DTC UK website by my friend who had use them to get an earlier driving test date himself. DTC driving test cancellations changed my driving test from three months to 3 weeks at the Hemel Hempstead practical test centre. That’s just amazing.

I would invite any learner driver who wanted to change their driving test to an earlier date to use the services of DTC UK rather than waste hours and hours searching themselves.

This is a fantastic website to use. It is simple and straightforward, there was no form filling. They got me a quick driving test at Hama Hempstead and I did not have to pay for it until I was completely happy with the time and date of my test.

Have used DTC Fast Track Driving Test Services three times in the past and have always had a good service. They have always been able to find me a last minute driving test!